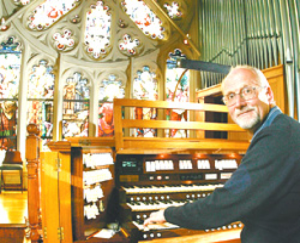 Based in France, Christopher has become a regular visitor back to his home country of New Zealand, performing concerts with outstanding skill and showmanship.

Chris studied organ with Ernest Jamieson (St. Mark’s Church, Wellington), Maxwell Fernie (Westminster Cathedral, Victoria University and St. Mary of the Angels, Wellington) and subsequently with Jean Ferrard (Professor at the Conservatoire of Brussels). After specialized studies of French Classical organ and harpsichord music (the latter with Paule van den Driessche and Scott Ross), the symphonic organ repertoire and the fortepiano, Chris has been free-lancing in France and around Europe for 30 years, often travelling with his fortepiano or harpsichord. In 2004 he was the Recitalist at the NZ Organ Congress.

Chris is also keen on popular music and accompanying silent movies. He has twice performed at the Saint Tropez Antipodean Film Festival and in 2008, following successful performances in London, Paris and around New Zealand, he was invited to accompany a New Zealand silent film at the Wroclaw International Film Festival.